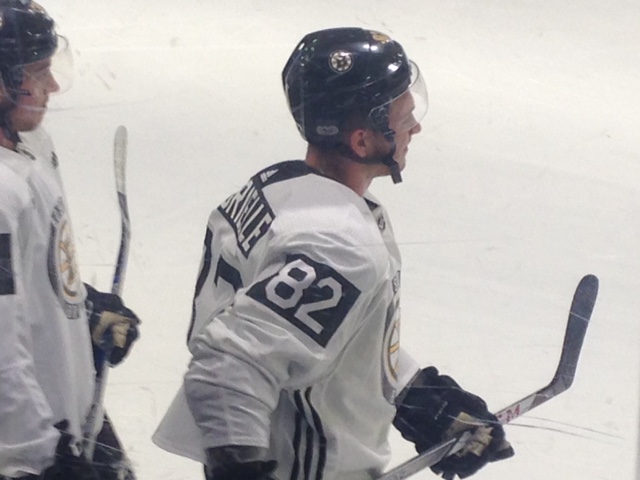 Jesse Gabrielle (82) and Ryan Fitzgerald wait their turn during a drill on Sunday.

BUFFALO — Connor Clifton may not have the size, skating ability or pedigree of some of the players on the Bruins roster at the Prospects Challenge, but he’s been one of their more noticeable players through two games.

Whether he’s practicing or playing in a game, Clifton’s body language tells you that there is no other place he’d rather be than on the ice making things happen.

Boston pro scout Dennis Bonvie and executive director of player personnel John Ferguson Jr.  both agreed on Sunday that Clifton’s passion for the game is one of his better attributes.

Jay Leach, who will coach Clifton in Providence this season, talked up the former Quinnipiac captain after the Bruins practice. (There were no games on Sunday.)

“He’s exciting to watch, on both ends of the ice. He’s involved. He loves to play hockey, I can tell you that. A little rough around the edges, but has some potential. As a staff/organization, we love his compete and the way he’s jumping into plays,” he said.

“I don’t know if I’ve ever seen a defenseman have two breakaways on a penalty kill before. It’s pretty amazing. There’s obviously something there. We’re excited about it.”

Clifton, 22, was drafted by Arizona in the fifth round, 133rd overall, in 2013, but opted not to sign. He inked an AHL deal with the P-Bruins on Aug. 17, two days after hitting free agency.

Against Pittsburgh on Friday and Buffalo on Saturday, Clifton rarely saw a rush he didn’t try to jump into.

Leach and his staff will no doubt work with Clifton on picking his spots, but not just yet.

“At this particular moment, I think we just let him fly. I did show him this morning something defensemen work on, just to help him when he gets in a certain situation,” Leach said.

“We can tweak (his play), but you don’t want to completely tame the horse.”

The Bruins practiced for an hour early on Sunday afternoon without defenseman Emil Johansson and center Jack Studnicka.

Johansson is out with a concussion after taking a big hit on Saturday, said Leach.

Studnicka is day to day with a lower-body injury after being hit by a puck. He’ll be assessed again on Monday.

No McAvoy on Monday?

Leach said he didn’t think Charlie McAvoy would be in the lineup when the Bruins play their final game of the Prospects Challenge on Monday at noon against New Jersey.

“There’s some other guys we’d like to see play,” he said.

Leach has liked what he’s seen from Studnicka, who sniped Boston’s first goal on Friday.

“He’s a heady player. Has some intangibles, back-to-basics hockey stuff, quick on pucks, able to read plays well, takes pucks to the middle and sucks guys in. Does a lot of nice things. He’s been pretty impressive,” Leach said.

Studnicka, 18, was drafted in the second round, 53rd over all, in June. He’ll captain the Oshawa Generals this season.

Gacek gets an invite

Gacek, who played four seasons at Miami University, has an ECHL deal with Atlanta and will attend Providence’s training camp.