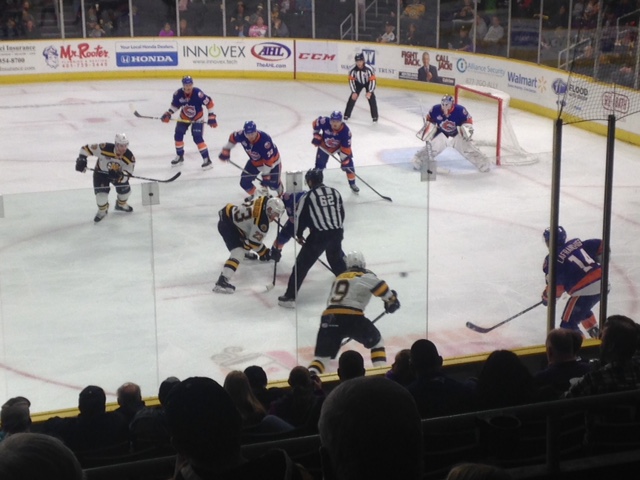 PROVIDENCE — How to sum up the 6-0 loss that the Providence Bruins suffered at the hands of the Bridgeport Sound Tigers on Sunday afternoon?

It’s been many a moon since the P-Bruins have been beaten like that on home ice, and thank God for that.

Here are five quick hits on the game, which was the finale of a three-games-in-three days weekend:

Providence was outshot badly in the first 10 minutes and then gave up a pair of goals within 1:35 just after the midpoint of the period. They never recovered.

“(The Sound Tigers) clearly were ready to go and we were not. In three-in-threes, that is the cardinal sin. You get behind the eight ball early and it’s really, really hard to come back. That team over there played a real good, solid, hard game. We were not ready to match that,’’ said P-Bruins coach Jay Leach.

As long as former P-Bruins captain Brent Thompson is behind the bench, Bridgeport will make things difficult on opponents.

“The biggest takeaway (from Sunday) is being ready and able to confront a hard team like Bridgeport. That’s the hardest team we’ve played. They clearly are able to be hard on the walls, hard on pucks, well-structured. We’ve had a hard time with them, frankly, both nights. They beat us 1-0 on Friday and it wasn’t a great game for us. We clearly have something there that we’re going to need to improve upon if we want to compete against a team like that,’’ Leach said.

FIGHT TO THE FINISH

I can’t remember the last time there were four fights in a game at The Dunk. Home fans didn’t have much to cheer about on Sunday, but at least there were some decent bouts.

Sena Acolatse (2), Tommy Cross and Adam Payerl all answered the bell for the home team.

“I give all those guys a huge amount of credit to step up like that, really, in a nothing game on a Sunday. They were willing to show that as a team we’re not going to just take it. Kudos to all of them for doing that because it’s a tough thing to do,’’ said Leach.

Leach didn’t have any problem with the Sound Tigers using their top power play unit right up to the end, even with a big lead.

“I never really look into that stuff. As a coach, if things are clicking, you want to keep them clicking. It’s 6-0. They deserve to be up 6-0. They want to put out their (first) power play, it doesn’t bother me one way or the other,’’ said Leach.

“We put ourselves in that situation. It’s hockey and you want to score goals, that’s what you do. I have no problems with that. (Brent Thompson) is a former teammate of mine and by no means do I think he’s anything but honest and just wants his team to succeed.’’

Looking on the bright side, while Sunday was bad, Providence got some good work out of a number of players over the weekend.

“Colby Cave played really well. Up and down the lineup (in Saturday’s 5-0 win at Hartford) everyone played well. Chris Porter played terrific all weekend, great energy. Chris Breen was terrific through all three games. Tommy Cross was good,’’ Leach said.

“Zach Senyshyn was good. His last three to five games, he’s doing a lot of little things that we’ve been talking about and he’s looked good. We’ve worked with him, trying to find that inside ice and use that speed in the right way. He’s coming along.’’