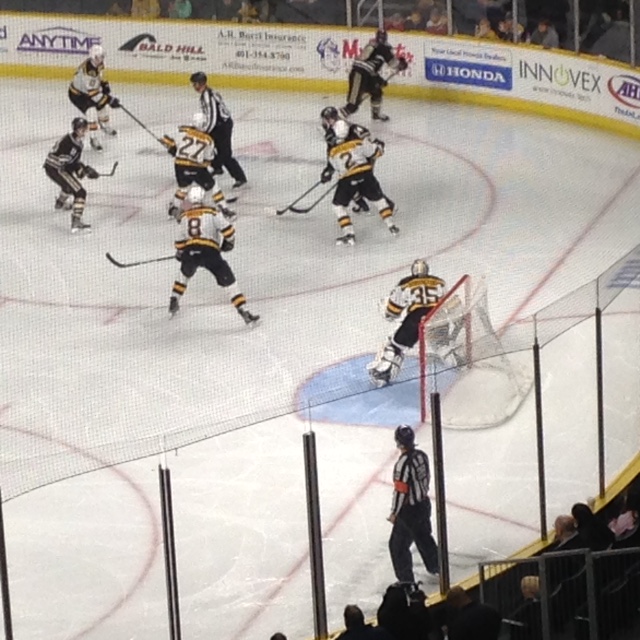 Riddled with callups and injuries, the Providence Bruins split two games at home over the weekend. They did not play well in a 4-1 loss to the Hershey Bears on Friday night, their fourth defeat in a row. But they bounced back with a strong 4-1 win over the Bears on Sunday afternoon.

“I don’t want to say we had our backs against the wall, but we had to have some urgency (on Sunday),” said coach Jay Leach. “Right from the start we were on our toes and skating and guys were engaged and helping each other out. We talked about it (on Saturday). We have a young group and our older guys are going to be asked to help that young group out in a lot of different ways. I thought they did that really well and the young guys followed.”

*** Colby Cave showed good hands in faking out Pheonix Copley for a goal on Sunday and later assisted on Colton Hargrove’s tally. He also spent a lot of time matched against Hershey’s top line of Chris Bourque, Travis Boyd and Wayne Simpson and helped keep them off the scoreboard.

*** In his first game since Oct. 28, Justin Hickman played well on Friday, scoring a nice breakaway goal for his first of the season.

*** The P-Bruins held Hershey to 18 shots on Sunday. And they were opportunistic at the other end, scoring four goals on 20 shots

*** Jacob Forsbacka Karlsson made an alert play on Sunday, pouncing on a Copley pass behind the goal line and stuffing it into the empty net to give Providence the lead just 1:43 into the game.

*** Kenny Agostino was returned to Providence late on Sunday afternoon. Some of the other callups are likely to follow as Boston’s injured players get back to good health.

*** Providence gave up two goals in the first 5:57 on Friday night.

*** The next three games are on the road, as the P-Bruins visit Binghamton on Wednesday and Charlotte on Saturday and Sunday.

*** Tough break for Jesse Gabrielle on Sunday. He was originally credited with an assist on Austin Czarnik’s goal, which would have been Gabrielle’s first point, but the helper was later changed — correctly — to Adam Payerl.

*** The P-Bruins aren’t getting many goals from their defensemen. Only Tommy Cross (2) and Emil Johansson have scored so far.

*** Hickman’s goal on Friday was Providence’s first at the Dunkin’ Donuts Center since Oct. 22, a span of 163:02. During that time, Bridgeport and Hershey outscored the P-Bruins, 10-0.