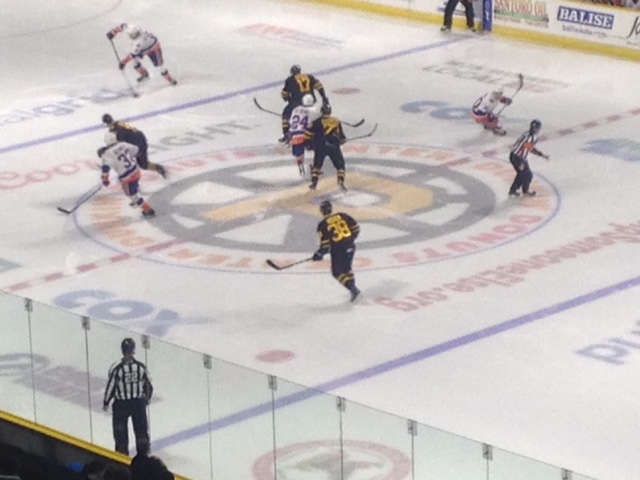 The Providence Bruins had a solid weekend, earning four of six points. All three games were decided by one goal. The P-Bruins posted a 1-0 shootout win at home against Bridgeport on Friday night, a 2-1 overtime victory at Springfield on Saturday, and a 3-2 home loss to the Thunderbirds on Sunday afternoon.

*** Brilliant work on the penalty kill by Rob O’Gara, Jeremy Lauzon, Colby Cave, Austin Czarnik and Zane McIntyre in holding Bridgeport off the board on back-to-back shorthanded situations in overtime on Friday night.

*** The give-and-go between Kenny Agostino and Jakob Forsbacka Karlsson that culminated in Agostino’s OT goal on Saturday was a thing of beauty. In addition to Saturday’s goal, Agostino scored in the shootout on Friday.

*** Austin Czarnik buried the shootout winner on Friday and had three assists in three games. He is sixth in the AHL in scoring with 13-32-45 in 41 games.

*** Ryan Fitzgerald continues to play well. He had goals on Saturday night and Sunday afternoon.

*** Josh Hennessy had a strong weekend, setting up two goals on Saturday night and scoring one on Sunday.

*** The P-Bruins got a major break when Bridgeport’s most dangerous offensive player, Josh Ho-Sang, wasn’t used in the shootout on Friday night.

*** Providence is 6-2 in shootouts. Their six wins is second in the league.

*** The P-Bruins continue to draw strong crowds and is fourth in the AHL with an average of 8,195. Providence helped fill Springfield’s building again, too, drawing 6,793 on Saturday, 2,000 above the Thunderbirds’ average.

*** Atrocious call by referee Cam Voss at the end of regulation time on Friday, whistling Tommy Cross for unsportsmanlike conduct after a scrum. It should have been matching minors on Cross and Ben Holmstrom, who started it by jabbing Cross in the midsection with his stick, then grabbing onto Cross and refusing to let go. Voss showed no feel for the game by ringing up only Cross.

*** The P-Bruins scored only five goals on the weekend.