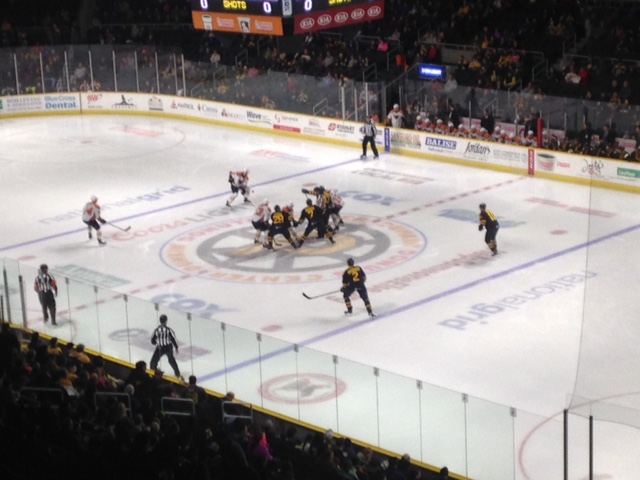 The Providence Bruins took care of business last week, going 2-2 to wrap up their sixth straight berth in the Calder Cup playoffs. The P-Bruins lost, 3-2, at Bridgeport on Tuesday; beat Hartford, 6-3, at home on Friday; beat Bridgeport, 4-2, on the road on Saturday; and lost at home to Lehigh Valley, 6-3, on Sunday.

“Playoff experience cannot be replicated anywhere else. The opportunity that we have to be in the playoffs and take a stab at the (Calder) Cup is awesome. It’s something you battle all year for. We are very excited for that,’’ said coach Jay Leach.

*** After another good week, Austin Czarnik is third in scoring in the AHL with 23-43-66 in 62 games. He earned a well-deserved slot on the AHL’s Second All-Star team.

*** Jeremy Lauzon scored his first goal as a pro on Saturday night.

*** Jack Studnicka played well in his first three games as a pro, with four assists.

*** The P-Bruins trailed by four goals going into the third period against the Phantoms on Sunday, but made a game of it, outshooting Lehigh Valley, 23-5, and closing to within two goals before giving up a late empty-netter.

*** Back after missing a couple of games because of injury, Zach Senyshyn scored his 10th goal of the season after taking the puck strong to the net in the first minute of the third period on Sunday.

*** The boarding major called on Sena Acolatse by referee Terry Koharski in Bridgeport on Tuesday was weak. It’s no coincidence that the call came after Jay Leach had given Koho an earful about some blatant interference by the Sound Tigers that went uncalled.

*** The P-Bruins gave up six power play goals in 17 shorthanded situations in their four games.

*** Zane McIntyre gave up eight goals in a 29:59 stretch from the third period on Friday to the second period on Sunday. His numbers took a beating, but there were extenuating circumstances. The three goals on Friday were in garbage time as the P-Bruins finished off a rout and on Sunday a number of mistakes were made by his teammates in front of him.

*** Providence was outshot, 20-8, in the first period against Lehigh Valley on Sunday.