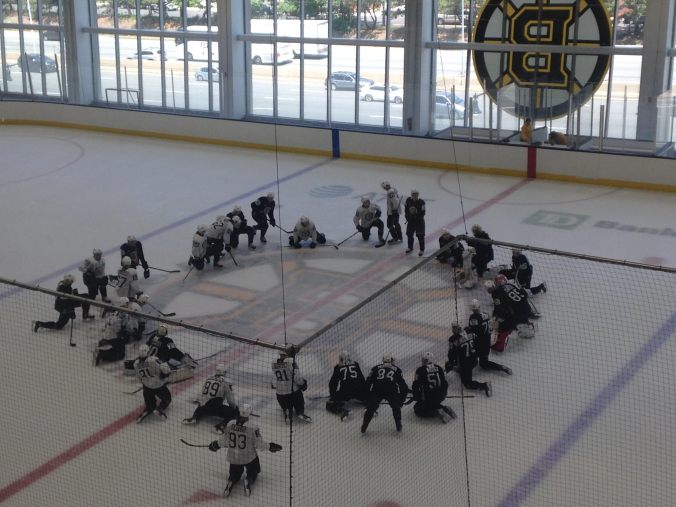 He was the best player in camp.

Nice prospect, but his camp performance confirmed that he has work to do before he is NHL ready.

“He’s one I’d want to give just a little bit of kick to just to get going a little bit,” said Langenbrunner on Tuesday. “He’s kind of feeling his way through this a little bit.’’

Brown University’s Marchin finished strong with a pair of goals in Friday’s scrimmage. He showed off his hard shot by one-timing a Studnicka feed into the net, then went to the edge of the blue paint for his second score.

Marchin, who turns 23 this fall, is farther along in his development than many of the youngsters in camp. At 6-foot-3 and a solid 215 pounds, he already has a man’s body.

“The beginning few days I was getting into the groove. In the summer, you’re working on technique and you’re going slower, then when you get here you have to do all that stuff at a much higher pace. It was good that I was able to connect it in time, for the last two days,’’ Marchin said.

Brown needs him to put up some numbers this winter and if plays like he did this week, he should have a good year. And have some options to continue playing.

The 5-foot-9 defenseman put up 42 points in 43 games for Northern Michigan. Moving the puck is his strong point and he did it smartly in Friday’s scrimmage.

“(Camp) was a great experience. Found out what it takes to be at this level. There’s no better place to come than an Original Six organization. You realize what it means to be a pro,’’ he said.

“The way the game has changed, (smaller) guys that can move the puck and prosper is encouraging. Makes me feel like I have a chance. Back in the day, guys like Torey Krug came in and paved the way. I just want to work hard and get to where he is.’’

Beaulieu is a name to keep in mind when NCAA free agent season rolls around next March/April.

Players from non-traditional hockey locales have become a thing lately in the college and pro game.

The Bruins had that base covered with Keyser of Coral Springs, Fla., and Fossier of Alpharetta, Ga.

Keyser, 19, plays for Oshawa of the OHL. He signed his entry-level contract after rookie camp last September. Fossier, 21, is a free agent who will be a junior at Maine.

I asked Keyser how a kid from Florida gets to the OHL?

“Hard work and getting to know the right people who can put you in the right situations to succeed,’’ said Keyser.

“ I was fortunate to grow up in Florida and play hockey there. I met a lot of good people and NHL retired guys that helped me and I’m thankful for that. They gave me the right opportunities and options. The rest was up to me to do the hard work that got me where I am today.

“I grew up playing for the Florida Jr. Panthers, the Alliance, Triple A teams, and we’d come up north here to Boston and Detroit and get as much competition as we could, get scouted as much as we could, and go from there.’’

“I thought about it long and hard with my family. We spent about a month thinking about me decision and what I was going to do. At the end of the day, I think we made the right decision. The OHL was what I wanted to do. I felt like it’s a professional style of game and I’d be competing against the best players in the world at my age every single night. That’s what I wanted, to give myself the best opportunity to play against the top players, because you’ve going to play against the top players in the NHL, as well.’’

Fossier opted for the NCAA route.

“My dad grew up playing hockey so he put me in it pretty early. Believe it or not, there are a few places that you can play in the South that can get you far enough growing up. Eventually I had to move away from home to play juniors. I was fortunate to have some teammates, even down in Georgia that are playing D-I, too,’’ he said.

“My team for most of my youth hockey was composed of kids from Florida, Georgia, Tennessee, Alabama that we kind of pulled together to make a AAA team. There was a lot of travel, even just for practice, and flying up north on weekends for games. It was busy for sure.’’

It paid off. After a couple of years of junior hockey, Fossier ended up at Maine. He led the the Black Bears in scoring last season as a sophomore.