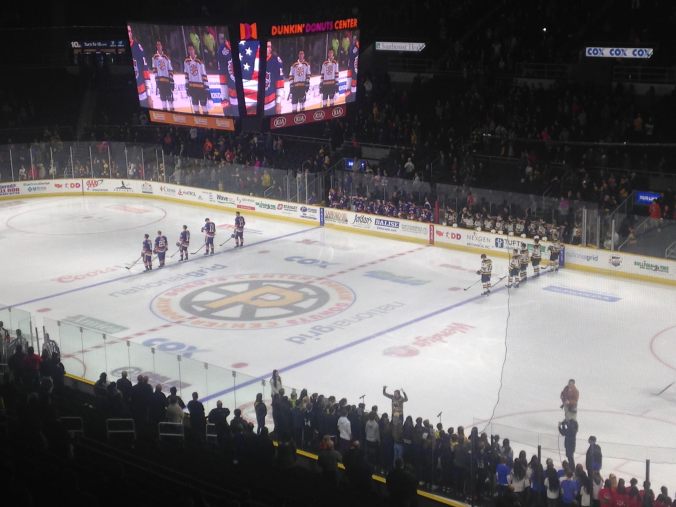 The Providence Bruins kept their heads above water by earning three out of six points last week. They had a hard time solving Thatcher Demko (31 saves) in a 5-2 loss in Utica on Wednesday. They rallied late to come away with a point before losing in overtime at home against Bridgeport on Friday. They followed that up with a very solid 6-2 win over Hershey at the Dunkin’ Donuts Center on Saturday.

“As far as the week is concerned, it was fine, with the schedule and the travel and all that. We’ll take those points, but we’re going to have to make some headway here. A lot of that might be in the second half when we’re home a little bit more. We have six (straight) games on the road. We have to learn how to win on the road,” said coach Jay Leach.

*** The P-Bruins were eight seconds away from a loss on Friday night before Ryan Fitzgerald swatted in a Kyle Cumiskey rebound and sent the game to overtime.

*** Defenseman Cumiskey had 1-3-4 in the week’s 3 games. He had been on a PTO, but the P-Bruins smartly signed him to an AHL deal on Friday.

*** With the victory on Saturday, Zane McIntyre set the all-time regular-season record for wins with 68, overtaking John Grahame.

*** Tanner Pond had a strong game against Hershey, getting under the skin of the Bears  with some hard hits and scoring his first AHL goal. Unfortunately, he was victimized by a couple of not-great penalty calls.

*** Trent Frederic  added some extra finish when he ran Bridgeport’s Steve Bernier hard into the boards in the third period on Friday. On Nov. 10, the Sound Tigers’ winger received a five-minute major and a two-game suspension for charging Frederic. That hit knocked the Providence rookie out of the lineup for three weeks.

*** The P-Bruins took delay-of-game penalties for shooting the puck over the glass on both Friday and Saturday nights.

*** Austin Fyten was suspended for one game for a slash in the Bridgeport game that earned him a five-minute major. The Sound Tigers scored once on the power play.