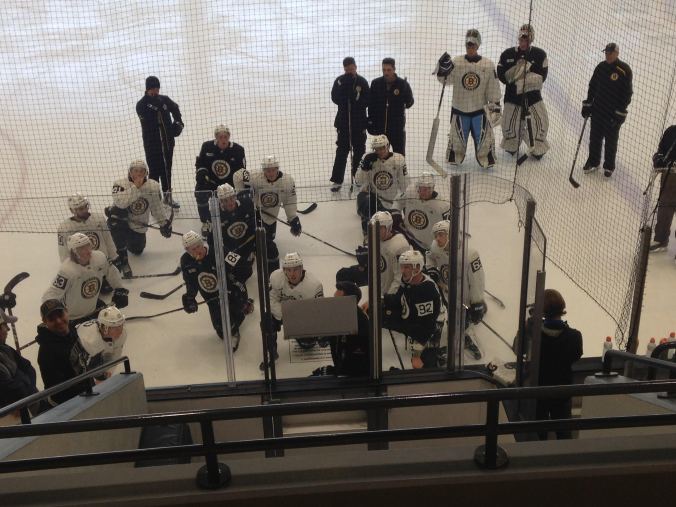 Compared to past years, the 2019 Boston Bruins development camp was short on snap, crackle and pop.

There were some excellent players, but no Tyler Seguins, Charlie McAvoys or David Pastrnaks. Or even Dougie Hamiltons.

And three of Boston’s better prospects – Jack Studnicka, Kyle Keyser and Jakub Lauko – didn’t go on the ice. They finished their seasons just a few weeks ago and didn’t need the work.

The lack of star power may be the reason crowds were a bit sparse, especially compared to bygone days when Ristuccia Arena was packed with enthusiastic fans.

Jamie Langenbrunner of the Bruins cautioned against “overvaluing” development camp performance, to which I say: Amen.

F OSKAR STEEN – For my money, Steen was the best player here. He’s played at a higher level than the rest – the top pro league in Sweden — and it showed. He has an explosive first step and plays with pace all over the ice. Steen made some nice plays around the net while also showing the ability to finish.

He’s going to need time to adjust to the smaller North American rinks, so I believe starting the season in Providence would be good for his development, though I’d bet on him playing NHL games next season at some point.

A top line of Paul Carey-Studnicka-Steen could do some damage for the P-Bruins.  Just sayin’.

F JOHN BEECHER – Don Sweeney’s description of Beecher’s skating as effortless was right on the money. He’s a runaway train when he gets going. We’ll get a better idea about his hockey sense and puck skills when he gets to Michigan.

F PAVEL SHEN – The Russian, who was good in the World Juniors, didn’t bring me out of my seat with dazzling dangles in camp, but he showed a knack for protecting the puck and making some plays. Hopefully he’ll be in Providence this season.

D COOPER ZECH – I said going in that he’d be one of the top players and he delivered. The sequence early in Friday’s scrimmage when he made two or three subtle moves to elude a forechecking Steen was vintage Zech. He looked to make a play every time he touched the puck. As a member of the Boston staff put it, he plays with conviction.

D NICK WOLFF — Twenty years ago, a rugged customer like Wolff would probably be a lock to play in the NHL just for his physical presence. Times have changed as the game gets faster, but Wolff has a chance if he continues to improve his footwork and his stick skills. It looks to me as if the Bruins have the inside track on signing him – either to an AHL or an NHL deal – once he finishes his senior season at Duluth.

G JEREMY SWAYMAN – Maine’s best player is getting better all the time and was easily the best of the three goalies who played in Friday’s scrimmage. (Dan Vladar, who already has three pro seasons under his belt, didn’t play in the scrimmage.)