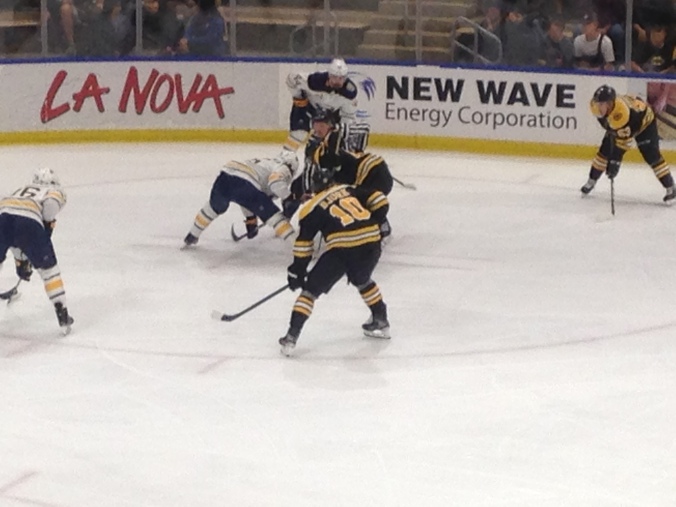 Anders Bjork (10) and Cameron Hughes, right, wait for Jack Studnicka to take a draw against the Sabres on Saturday night.

BUFFALO — Three one-timers from my first day at the Prospects Challenge.

I landed here on Saturday morning, so I didn’t see Friday’s win by the Boston Bruins over the Pittsburgh Penguins, but all reports were that Anders Bjork was one of Boston’s best players, scoring the winner in the dying seconds.

He played well again on Saturday against Buffalo. Skating at right wing beside center Jack Studnicka and left wing Cameron Hughes, Bjork made good things happen even though he was held without a point.

“He created. He’s involved. Obviously, he got a bunch of chances. Did a nice job,’’ said coach Jay Leach after Boston’s 4-3 loss.

“He’s definitely more assertive. He looks just a little bit more mature, is what I would call it. He’s certainly taking a step. Hopefully it continues.’’

As has been noted by a few observers, Bjork should be one of the better players in the Prospects Challenge. After all, he is farther along the development road at age 23 than many of the youngsters in Buffalo. Through two games, he’s delivered.

After two years cut short by shoulder surgeries, it seems to me that a solid stretch of games and good health in the AHL to start the season would be best for Bjork.

The 21-year-old Swede was Boston’s offensive star on Saturday, scoring the first two goals and assisting on the third in a 4-3 loss to the Sabres prospects.

After playing wing on Friday night, Steen was back at his customary place at center between Jakub Lauko and Dante Hannoun.

“I like both (positions), but I’ve played center all my life, so I think that’s my best spot,’’ Steen said.

After playing on Olympic-size rinks in Europe, he is adjusting to the less spacious North American rinks.

“I think I played better (Saturday) than (Friday). It’s a bit different between the small rinks and the big rinks,’’ he said.

“You don’t have so much time. It’s more playing north and south. You just go forward all the time,’’ he said. “I like it, but I just have to get used to it, be better at it.’’

Leach believes Steen – who is likely bound for Providence — will make the adjustment without a hitch.

“I haven’t seen much of a problem with him with the North American game. He’s straight lines. He’s ready to go,’’ he said.

This is a big year for Vladar, who is starting his fourth pro season at the age of 22.

He was the second goalie in Providence almost by default last season, but this time around he is competing with first-year pro Kyle Keyser to see who sticks with the P-Bruins. (Maxime Lagace, the 26-year-old signed as a free agent over the summer, is a lock for one of the AHL goalie slots).

Vladar was in the barrel against the Sabres on Saturday, and he gave up four goals on the first 19 shots he faced, including three in four minutes in the second period. But he turned away all 13 shots after that as the Bruins rallied to come within a goal late in the game.

“I felt better as the game went on. Obviously, those (four) minutes in the second period killed us. Overall, from my point, it’s the first game of the season, so it’s never easy for a goalie,’’ Vladar said.

“He’s got to find his spots,’’ said Leach. “When he’s routinely finding his posts, then he’s out and he’s big, he’s good. When he’s flopping around and he can’t find much, he’s not, he struggles. That’s what he’s got to find.’’

Vladar’s goal for the season is “to get a spot in Providence and run with it. I want to play as many games as I can.’’

He won’t be shying away from the competition.

“I’m just trying to enjoy it and work hard on my game to be the best I can,’’ he said.