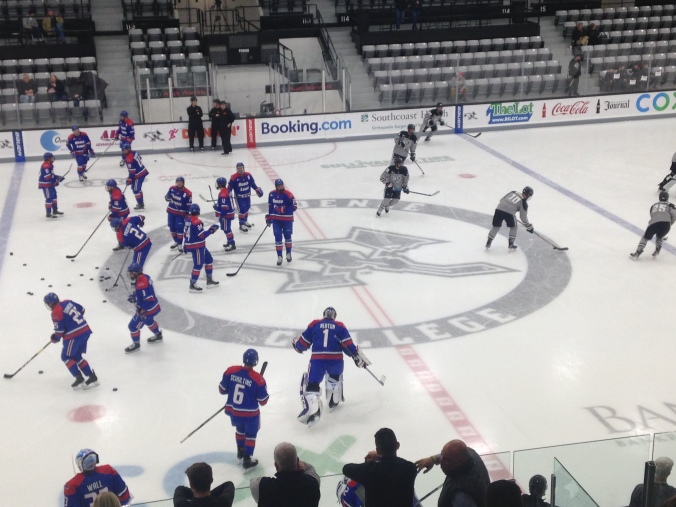 There are going to be weekends like this when you have a team with a dozen new players.

One night you’re up, as Providence College was on Friday after a 6-2 win at Boston College, where the Friars have had all kinds of trouble through the years.

Then the next night you play well at times but lose in the end. That was the case in Saturday’s 3-2 overtime defeat at home to UMass Lowell.

“You’ve got to get more than two points in a weekend if you want to be a good team in this league,’’ said coach Nate Leaman.

Five quicks hits from the weekend:

— PC was the better team in the first 40 minutes on Saturday, but Lowell pushed back hard with 19 shots in the third period and went home with a well-earned OT win.

“An emotional game the night before and then killing all those penalties, we definitely ran out of gas,’’ said Leaman.

“We took some dumb penalties. Then in the third period we did a really poor job of exiting our zone. We kept flipping it to them, and we were doing that (Friday) night, too. That’s a lot of youth there.’’

Michael Lackey is off to a fine start for the Friars with a .941 save percentage, a 1.63 goals-against average and two shutouts.

“I thought he had a great third period (on Saturday), held the fort when they made a good push. He’s arguably our best player this weekend,’’ said Leaman.

WHAT BROWN CAN DO

— In Matt Brown, Lowell has a freshman with a scorer’s touch. He had a goal, an assist and seven shots on Saturday.

His goal was a bomb from the faceoff dot, then he made the game-winner happen by firing a shot from the wing, low and on Lackey’s pads, that left the PC goalie with little choice but to boot the puck onto the stick of Carl Berglund, who put it in the net.

Brown isn’t big and his skating could be better, but it looks like he has the potential to be a point producer in Hockey East.

— Quietly, freshman defenseman Cam McDonald has been good for the Friars in the early going.

He’s not physically imposing at 5-foot-9, 170 pounds, but he moves the puck with confidence and he gets his shot through. His blast from the point beat BC’s Spencer Knight for what turned out to be the game-winner on Friday night.

“He’s a ballplayer, he’s an Alaska kid. The thing I’m really pleased with is that he just keeps getting better, keeps growing,’’ Leaman said.

— PC blew out Maine in the opener, then stumbled in an OT loss to Holy Cross. They bounced back with a sweep at St. Lawrence and Clarkson and a good win at BC, followed by the loss to Lowell.

“I guess that’s part of being a young team. We’re just going to keep taking two steps forward, one step back,’’ Leaman said.

“(Lowell’s) first two goals were hellacious turnovers by us. Their second goal, we just get done killing a penalty and (the PC players) have been in the zone for a minute and ten seconds and a guy (Patrick Moynihan) coming out of the box gets the puck and he’s got to get it deep so we can get a change. He tries to go one on one, we turn it over and they made us pay.