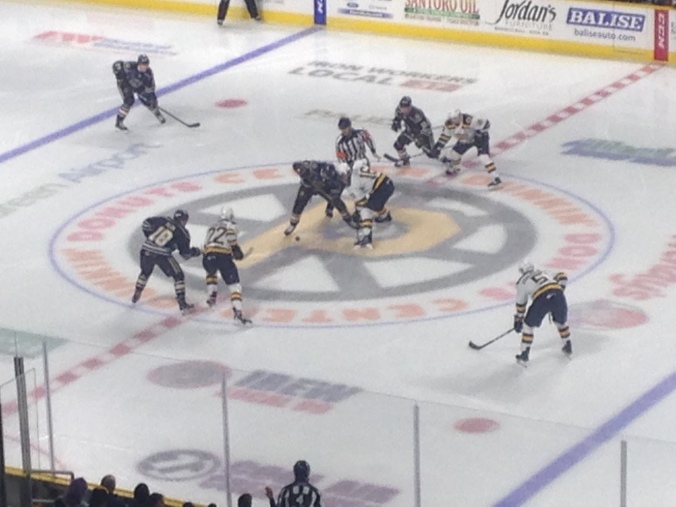 It was the best weekend of the season so far for the Providence Bruins as they earned five out of six points with two wins and an overtime loss.

They dominated Bridgeport, 5-0, at home on Friday, came from behind twice to earn a point in a 5-4 overtime road loss in Springfield on Saturday, then played very well in a 6-3 home win over Hershey on Sunday. They finished the weekend in second place in the Atlantic Division, trailing only Hartford.

“It was a good weekend,’’ said coach Jay Leach. “We obviously had a terrific game on Friday night. On Saturday, we had a terrible first period, but we rebounded, showed some character and really did a nice job.

“(On Sunday) I thought our first 35 minutes were really good. They got some life and it sounds ridiculous, but it is tough to play with a four-goal lead for an extended period of time. We knew (Hershey) would push but we did a nice job and it was awesome to see a guy like (Sean) Bonar in net get the win, which is always fun.’’

— Jack Studnicka continued his terrific play, taking over the team scoring lead. He scored a shorthanded goal on Friday, then sent Saturday’s game to overtime with a late goal. On Sunday, he scored a pivotal shorthanded goal and added two assists.

“He was our best forward. He was outstanding,’’ Leach said on Sunday. “That’s a big-time play (on his goal). He outmuscles a couple of guys and to finish in tight like that was pretty special.’’

Studnicka has goals in five straight games and is second in scoring among AHL rookies with 9-9-18 in 21 games.

— Studnicka’s linemates, Paul Carey and Ryan Fitzgerald, also had strong games on Sunday. Carey scored once and had two assists. Fitzgerald opened the scoring. He had a goal on Friday, too.

— Playing on the wing, Trent Frederic scored his first goal of the season on Friday, then added another one on Sunday.

— Urho Vaakanainen’s game is much improved in recent weeks. He had a pair of assists on Saturday, then scored twice and added an assist on Sunday.

— Brendan Gaunce scored twice and added an assist on Friday.

— Joona Koppanen scored a goal and set up Scott Conway for another as the P-Bruins erased a two-goal deficit in the second period in Springfield.

— Max Lagace posted his league-leading fourth shutout on Friday. His eight wins are tied for second in the AHL. His .930 save percentage is third.

— Providence’s third goal on Friday was a masterpiece of puck movement. It started with a strong zone entry by Peter Cehlarik, who pulled up and passed to Jakub Zboril. He quickly passed to Robert Lantosi, who put the puck on Brandan Gaunce’s stick for the score. Beautifully done.

— With Kyle Keyser and Dan Vladar injured, Sean Bonar was recalled from Atlanta and made 25 saves on Sunday to earn his first AHL win.

— Providence came up way short in the first period on Saturday . The P-Bruins took the lead on Robert Lantosi’s goal 19 seconds in, but were outshot, 22-10, and trailed 3-1 after 20 minutes.

— Providence’s next three are on the road, at Hershey followed by two in Charlotte.