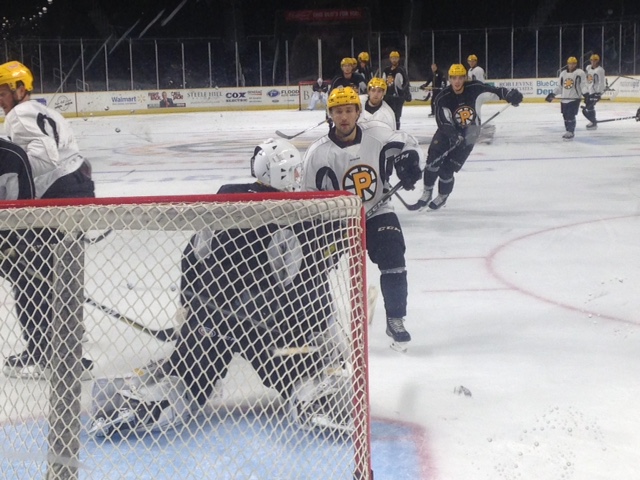 Alex Gacek looks for a rebound in front of goalie Mac Carruth on Wednesday.

PROVIDENCE — Training camp is underway for the Providence Bruins and that means things are in a state of flux.

It is expected to remain that way at least until next week. Boston has assigned some players to Providence and there is a healthy contingent of tryout players. Who will still be here on opening night on Oct. 7 remains to be decided.

Boston wraps up its preseason schedule with games in Philadelphia on Thursday and in Chicago on Saturday. Final NHL cuts aren’t expected for several more days.

That leaves “a lot of question marks” for the P-Bruins, according to first-year head coach Jay Leach.

“We’ve got some guys here that we’d like to see play and take a look at, which we will. The lineups (for Providence’s preseason games), though, will be TBD,” he said after Wednesday’s workout at The Dunkin Donuts Center.

The P-Bruins’ two preseason tilts will be Friday at Springfield and Saturday vs. Springfield at The Dunk. Start time both nights is 7 o’clock.

“The first day of the NHL season is probably when things will start to settle down. There’s obviously guys fighting for jobs up there. (Boston) might not know until the end. We’ll see,” Leach said.

He is satisfied with the first two days of camp.

“Both skates have been pretty intense. They’ve had some jump for sure, which is nice to see. We have a nice blend of guys that have been here, and they’re really kind of setting the tone, which is nice.

“And then there’s some tryout guys that really are borderline American Hockey League players. I don’t know if we’ve had as much depth in the past as we do this year,” he said.

Fitzgerald on the rise

Since the start of rookie camp early this month, no Bruins forward prospect has done more to raise his stock than Ryan Fitzgerald.

He played well at the Prospects Challenge in Buffalo, then followed up with a strong camp with Boston before being sent to Providence on Tuesday.

“He’s smart. He gets inside people. From the hashmarks in, he’s light’s out. And he’s got his dad’s balls,” said Leach.

Skilled center/left wing Chase Witala is in camp on a tryout. He was Jesse Gabrielle’s teammate in Prince George of the WHL. He has an ECHL deal with Atlanta. … Another camp tryout is 6-foot-2 winger Phil Lane. He’s played four seasons in the AHL — three with Portland and one with Springfield. …The line of Fitzgerald, Jordan Szwarz and Adam Payerl looked good on Wednesday. … Tryout Josh Hennessey, who played in Sweden for the last two-plus seasons, looked good, too. Hennessey scored 19 goals and 41 points in 69 games with Providence in 2011-12. The 32-year-old is a handy player to have around. “He can play on your first line or your fourth line,” said Leach.