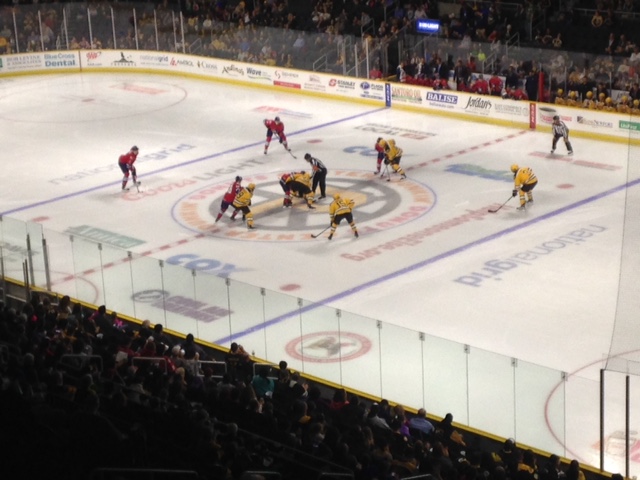 PROVIDENCE –Just like in Boston on Thursday night, the kids came through in impressive fashion in Providence’s 5-2 win in Saturday’s opener. Four of the goals were by rookies Jakob Forsbacka Karlsson, Ryan Fitzgerald and Zach Senyshyn and second-year pro Peter Cehlarik. Here are three takeaways:

Jay Leach put it best: “Peter Cehlarik looked like a man on a mission.’’ Did he ever. Cehlarik made Springfield defenseman Josh Brown look foolish and scored a pretty goal in the first period. Then he froze goalie Harri Sateri and fed Forsbacka Karlsson for an easy score. Impressive for a guy who did not play any preseason games after undergoing shoulder surgery in May. After the game, rink rat Cehlarik was at the stick rack working on a stick, even though the P-Bruins have Sunday off.  With Don Sweeney (who was at the game) mulling a callup after the injury to Noel Acciari in Boston, Cehlarik picked a perfect time to have a great game.

Zane McIntyre delivered some very timely saves on Saturday. Springfield had chances to take the lead early, but he shut the door. Guarding the lead in the second period, he made a pair of terrific stops and the P-Bruins finished the period up by three. “Early on in the season you’re going to have breakdowns. Zano was huge on those breakdowns for us,’’ said Leach. McIntyre had a great season a year ago. If he can come to close to matching that this season, Providence will be in great shape.

The American Hockey League can eat up rookie defensemen, but Jakub Zboril, Jeremy Lauzon and Connor Clifton acquitted themselves well on Saturday. They’ll have their struggles at times, but Saturday was a positive, confidence-building start. “We’ll have our (video) clips for them. We have some stuff to work with, but I thought that throughout the game they started to find their feet a little bit, and see the structure,’’ said Leach. “First pro game (for all three) with a good crowd, playing with some pretty good players, there’s probably some expectation there – our forwards want the puck, so get it to them. I thought throughout the night (the three rookies) got better as every shift went by.’’