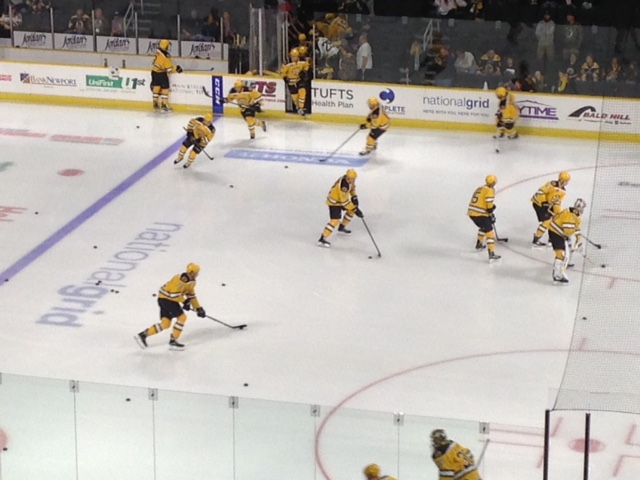 PROVIDENCE – The days when nearly every AHL team carried a heavyweight or three on the roster are pretty much over.

In Providence, the departure of Tyler Randell, a top five pugilist in the league for several seasons, leaves the team without a go-to hard guy.

“I don’t think we have an issue with that. We’ve got guys that are gamers. Tommy (Cross), Breener (Chris Breen), they all can handle themselves if something gets out of hand. And we’ve got Sena (Acolatse) as an option, Hick (Justin Hickman), Adam (Payerl), Taylor Doherty. We’re fine,’’ said Leach.

“Identifying one guy, I always found that to be a little unfair. It’s a lot to put on a guy. And I don’t know how much it does for your team. If everyone just lets Tyler Randell take care of things and they can go do what they want …  to me that wasn’t a fair play for a guy like that.

“I would prefer us to be responsible for our teammates on the ice every shift, no matter if Adam Payerl or Hick or Sena’s out there or if it’s a skill line, they can all still get in there and take care of each other,’’ he said.

The disappointment of being cut by the NHL club in training camp is one of the hurdles that P-Bruins players have to get over, whether they are high draft picks or free agents.

Leach, who played 12 seasons as a pro, feels their pain.

“You have to validate that. A lot of them had nice camps and they pushed. That’s what we asked; that’s what they did. We would never want to discount that, first and foremost. And then I think  you’re going to try to get them to a place where they accept where they are and build from there,’’ said Leach.

“Some it takes a little longer than others. Ultimately, they all figure out that it doesn’t do them any good to wallow. And I don’t think a lot of them, if any of them, do. On a personal level, I can share some experiences where I had a little bit of bitterness in me and it did affect me throughout the year. I will definitely share that experience.

“Training camp is a grueling time for a young kid. He shows up for the rookie tournament. Organizations are watching him play every single day for a month. They’ve got to perform under that microscope. If they’ve done well, we should – and we do – make sure they understand that we’re proud of them.  They probably need a day or two to just breathe,” Leach said.

Danton Heinen, for one, went right back to work after being sent down last week.

“He was firing pucks in practice, he was working on his sticks. He was ready to go,’’ said Leach.

Senyshyn on the board

Zach Senyshsyn got his first pro goal out of the way in the first game of the season on Saturday, burying a feed from linemate Chris Porter 45 seconds into the third period.

“I thought that overall he was good. I lost him in the second (period) when we had a lot of penalty kills,’’ said Leach.

“We got him right out there at the end of the second and in the third with (linemates Porter and Josh Hennessy) and they did an excellent job on the forecheck and (Senyshyn) was consistent the rest of the way through. He showed signs of his skating ability and disrupted some forechecks and in the neutral zone, so he was good.”

Playing with veterans such as Porter and Hennessey should be good for Senyshyn.

“Porter can really skate and obviously finishes (his hits) and it’s tough on defensemen. Zach and Ports, with that speed, it’s pretty nice.”