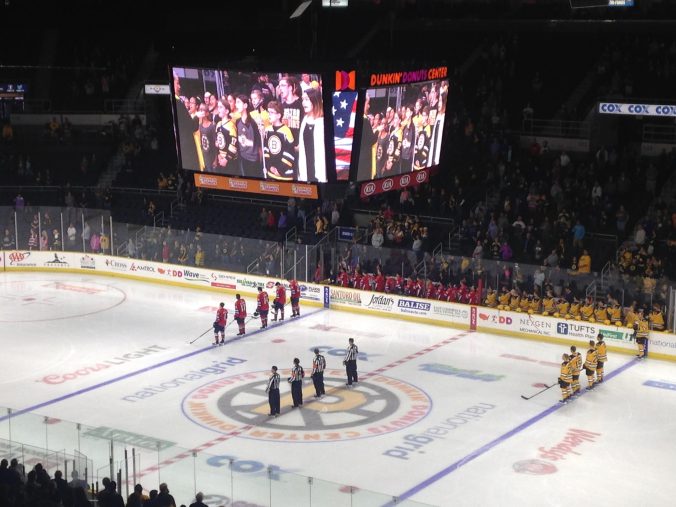 PROVIDENCE – Jakob Forsbacka Karlsson went back to work on Saturday, a day after he fell short in his bid to make the Boston Bruins out of training camp.

Still a month away from his 22nd birthday, JFK brought his “A’’ game in a 3-2 preseason win by the Providence Bruins over the Springfield Thunderbirds. Playing big minutes in all situations, he set up the first two goals by the P-Bruins, both off offensive zone draws.

Before the game, P-Bruins coach Jay Leach said that he talked with JFK on Friday after he was sent down about what he needs to work on.

“He has to continue to improve upon being engaged in the games. Going in and getting pucks and becoming a centerman that’s going to go and take pucks away. If you think about his preseason, there were a couple of times he gets in on the forecheck first, he pops one loose for a quick goal,’’ Leach said.

Starting Saturday’s game with Jesse Gabrielle on his left side and Mark McNeill on the right, JFK won races and puck battles, things that he did always do during Boston’s preseason games.

“Being a centerman for the Boston Bruins, you’re really asked to do a lot. Whether it’s fair or unfair, we’re always holding our standard to Patrice Bergeron. To get to that level you really have to make a difference in all areas of the rink. You have to be engaged in all facets of the ice. He’s going to continue to work on that,’’ he said.

Though undoubtedly disappointed over being sent down, JFK is taking the right approach, according to Leach.

“I talked to him yesterday about it. He wants to be in Boston, so he wants to prove that he’s able to do all those things. He’s a very focused individual. He’ll find his way, but right now his mindset is he wants to play and prove that he can do that,’’ he said.

Mark McNeill scored a goal and set up another in Providence’s win.

Cam Hughes opened the scoring at 6:32 of the first period, converting a nice backhand pass from JFK. Mark Fayne was credited with the second assist.

Providence’s David Broll and Springfield’s Tony Turgeon dropped the gloves off the ensuing the faceoff.

Shortly after, Austin Fyten of the P-Bruins and Riley Stillman engaged in a spirited scrap.

Zach Senyshyn made it 3-0 with a power play goal at 17:50 of the second period. Senyshyn, who had a strong game, hit the post on a breakaway, but the puck deflected off him and into the net.

It was only fitting that Senyshyn got the goal. Minutes earlier, he’d gone to the dressing room after being boarded by Turgeon, who received a five-minute major and a game misconduct.

The Thunderbirds scored twice on Dan Vladar before the end of the second period. Sean Bonar took over in the third period and made several nice stops to preserve the win.

Broll hurt his hand in the fight with Turgeon and did not return.

Jesse Gabrielle played well before leaving the game with an upper body injury.

Joona Koppanen went to the room in the third period after taking what looked like a knee-on-knee hit.

“He’s a really good guy. Obviously, you can see that he’s been around, knows the deal,” said Leach.

Fayne, 31, is hoping to earn a contract, either in Providence or elsewhere.

“It’s my first camp ever going in without a contract. It’s definitely a different situation, a different mindset, but you’ve just got to try to make the best of it,” said Fayne.