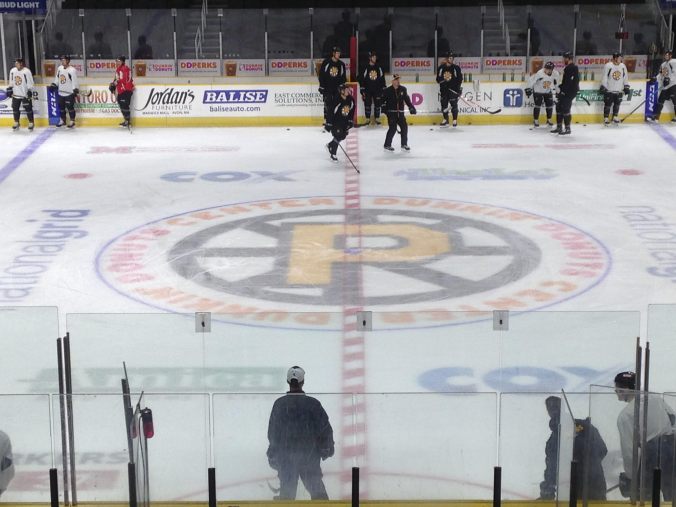 Zane McIntyre starts in goal for the Providence Bruins in the season opener against the Hartford Wolf Pack at the XL Center tonight at 7:15.

Jay Leach says the first game of the season is “a little nerve-wracking” for a coach.

“You just don’t know what the heck is going to happen. Especially this training camp this year (with Boston’s players divided into two groups to accommodate the trip to China),” he said.

“You just never know. Once the games start, that’s when the real work starts. That’s when you can start to teach, get your team to play the way you want to play.

“Even with (Boston), I know it was a tough first night, but it’s a reference point – ‘OK, this is where we’re at and this is where we’ve got to get to.’ Getting the first one out of the way is important.”

You can read my Providence Journal season preview here.

For the most part, the P-Bruins will have their ‘A’ lineup tonight.

Colby Cave won’t play. He is attending to a personal matter.

Cody Goloubef, who is coming off an upper body injury, isn’t expected to play this weekend. He had a hard skate after practice this morning.

With Goloubef not ready, Providence has six healthy defenseman.

I’m curious to see if we get a look at Urho Vaakanainen with the P-Bruins at some point this weekend. He’s been a healthy scratch for Boston’s first two games and there’s no fit for him in the lineup unless the big club has another injury on defense. Something to keep an eye on.