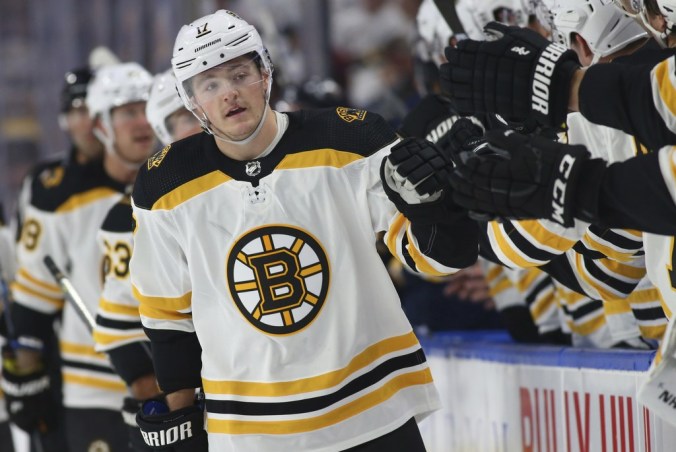 PROVIDENCE — As Toe Blake, Eddie Shore and Dit Clapper might have said (but didn’t, at least not in “Slap Shot”), there’s no sulking in minor league hockey.

True to those words, Ryan Donato was the first player on the ice at Schneider Arena this morning for Providence Bruins practice. He pushed the nets into place, emptied a bucket of pucks and went to work.

Two hours later, with practice long over and every other player gone, Donato got down on hands and knees to gather the pucks and fill up the bucket.

The rookie from Harvard isn’t letting Thursday’s demotion to the AHL after 11 games (1-0-1) in Boston this season deter him from his goal of making it as an impact player in the NHL.

“Obviously, I’m not happy about it, but I think every guy (in Boston) at one point has had their fair share of time down here. The only thing I can do is use the time here to my advantage,’’ Donato said afterward.

In Boston, playing time has been harder to come by lately for Donato. He’ll get all he can handle with the P-Bruins.

“I like playing in the games here. You get a lot of ice time. I’m feeling the puck again, which is nice,’’ said Donato, who recorded an assist and seven shots on goal (including an unsuccessful penalty shot) in two games against Charlotte over the weekend.

As for the message from Boston management, “there’s some stuff internally that they told they wanted me to work on, but just stay positive, it’s a part of every young guy’s career. Come back hungrier when you do come back,” Donato said.

Providence coach Jay Leach and his staff will work with Donato on the finer points of his game.

“Offensively speaking, he can create. I do think that his details need to be worked on. He knows it. He’s fully willing to dive in and talk about the other side of the game – without the puck or even with the puck sometimes, taking care of it,” Leach said.

“Like any young player that has an abundance of talent and has had success really wherever he’s gone, when you are reassigned to the American League, it does take some time. There’s an adjustment period. That’s where he’s at. It’s a tough league to play in, frankly. Mentally and physically, especially for those guys that start their pro careers up (in the NHL) and have that success and then they come down.”

Donato said that one of the things that was stressed by his father, Ted, and the Boston coaching staff is that “(the AHL is) a really good league. Don’t think for a second that anybody’s too good for it, cause they’re not. Take it as a positive and go down there and work as hard as you can, and prove that you should be up.”

He learned a few things in his first taste of the AHL over the weekend.

“A lot of guys are running around. There’s a lot more guys playing kind of an old-school style of hockey where there’s a lot more hitting and it’s more physical, which I tend to like. Hopefully I can learn from that and bring it when I come back up,” Donato said.

So how long does Donato expect to be in Providence?

“It’s really how I play that determines how long I stay down here. I think (management knows) the player that I can be. They told me they know I’m talented and will have, hopefully, a future (in Boston). I’ve got to make time for this and hopefully change some things about my game so I can be useful when I get up there,” he said.